Van Gogh Museum was looking for a target group strategy which would help the entire organization by taking the needs and motivations of various types of visitors as starting point. For that purpose, Motivaction developed a set of four personas, which are applicable in the Netherlands and internationally.

Step 1: Map the needs and wishes of Dutch visitors and potential visitors. We researched the familiarity with the museum, visitor behavior and visit intention in the Netherlands via ad-hoc research. We then combined the findings to identify which values segments are most important in the Netherlands and abroad in other key markets.

Stap 2: Upon completion of the research in the Netherlands, we discussed the results with stakeholders from the Van Gogh Museum in an interactive session and we determined the various visitor profiles. There are five values segments in Glocalities, four of which are relevant for the Museum in general and three are relevant in the Netherlands in particular. The fourth segment, which is small in the Netherlands, is very large internationally. Based on the Glocalities values segments, we developed four (inter)national personas. 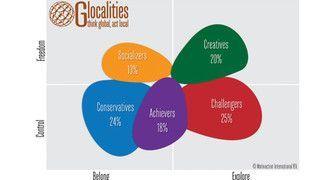 During workshops, we created the visitor personas and brought them to life. Workshop participants included employees from ten different departments of Van Gogh Museum who are greatly involved with visitors. The personas are a combination of research data and the knowledge among employees of the Van Gogh Museum.

In the following phase, we conducted research in 15 more countries. We conducted extra analyses based on recent Glocalities data in those countries to add more depth to the personas. We enriched the personas with information about their interests, leisure activities and media behavior. We used this information to compile a persona manual. Subsequently, we launched the personas in three sessions with employees. In those sessions, the employees got to know the personas better, partly through a quiz.

“There were huge posters on the wall and we showed films. When it was time for a break, we let the staff choose which snack belonged to each persona. So people went snacking like the personas would.”
Laurine van de Wiel, Head of Marketing Van Gogh Museum.