Share-Net Netherlands: Thank you for this opportunity. Share-Net Netherlands is very interested in learning more about your work as we believe that some of the insights you have gained can be extremely relevant for our members. You are a Senior Research Consultant at Glocalities, a global research initiative by the independent research and consultancy bureau Motivaction International. Glocalities specializes in international research into the deep cultural values and socio-political trends in societies and provides communications advice to international organizations. You recently conducted a transatlantic study on the rise of rightwing nationalist anti-establishment parties in the West. Can you tell us a bit more about this study and how some of its results can potentially relate to the field of SRHR?

AC: Motivaction International focuses on understanding the psychology and values of people and the deeper trends in societies. We do this by conducting large global surveys. These surveys are held annually and cover over 50,000 people in more than twenty countries. We want to understand people on a deeper level and explore what truly drives their behavior. It is known from psychological research that human behavior is, in fact, driven by values. An example of a value-based question that we have in our surveys is the following: “The father is the head of the household.” The answer to this statement reveals how one perceives reality. According to US professor in cognitive linguistics George Lackoff “strict father morality” is the crucial metaphor to understand conservative thinking and framing by conservative politicians. Indeed in our data strict father morality goes together with high scores for respect for authority, obedience, honor, success, status, religiosity, family orientation, respect, wealth, and the attitude to only enjoy what you have earned. The strict father statement also exposes great differences between countries. Western European countries score the lowest on this statement, while Indonesia, Turkey and Russia score the highest. People in the US and Eastern Europe are also relatively conservative based on their response to this statement. 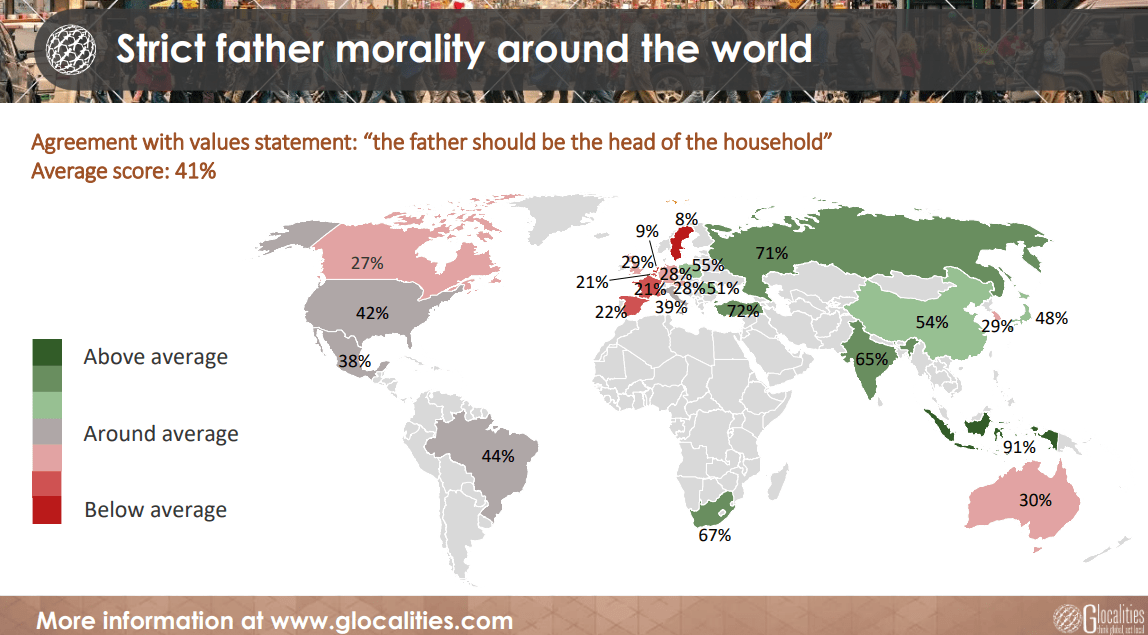 Why is this relevant to SRHR? Well, you would have to probably frame your message very differently in Poland where 55 percent of the people believe that the father should be the head of the household as opposed to a country like The Netherlands where it is only 9 percent. Based on the information collected from our survey questions, we make segmentations according to value clusters in societies in order to better understand how different subgroups in society think and act. Keep in mind that people are not necessarily moved by arguments, but rather by emotions and instincts which derive directly from their values.

We believe that what we are seeing now in the world is a cultural backlash against progressive values. It is an interesting paradox – it is precisely because progressive values have been on the rise that we experience this cultural backlash in the West. In other parts of the world, too, many people perceive that Western values are being pushed upon them. This is very much a backlash driven by values. You can see it in the kinds of arguments that are being used whether by Putin or by Trump on his Twitter account. They use cultural arguments and hot-button issues in order to mobilize people.

This is, in fact, how we became interested in SRHR in the first place. One of the main hot-button issues used in these debates are precisely sexual rights. LGBT rights, for instance, are one of the most prominent themes in the political communication of cultural right wing mobilizers. In order to fight back and be effective, one has to first understand these cultural dynamics and the various frames being used in the debate. Framing is one of the main ways in which different values are being inserted into the public debate. In other words, you have to first see what options there are in different countries for putting your own values at the front and framing them in such a way that they appeal not only to your own bubble but also to what we call the “silent majority” – people who are not necessarily convinced by any party on a particular issue but who could nonetheless be swayed through the right framing. Based on our data we provide campaign advice how to be more effective in framing the debate.

Can you think of any examples when the SRHR community was able to successfully calibrate its message and win over this silent majority?

AC: Yes. We have to keep in mind that different strategies are needed to reach different goals. Not all goals require that everyone in society needs to be convinced of your message. For example, a lot of abortion rights have been established in court, through lobby or small scale activism. If your goal, however, is to win a referendum, like the referendum on same sex marriage in Ireland, then different strategies are needed in order to achieve mass mobilization. No matter what the strategy is, however, the most important thing to keep in mind is that one should never take over the values and frames of one’s opponents. Rather, we should always talk from our own values. There are, of course, values that are widely shared in society and that most people can relate to. Yet there are other values that are only shared by smaller groups. When you only emphasize the latter, then you are putting other people off. The choice over which values to emphasize, in other words, should always be a strategic one. In the case of the Irish referendum, for instance, they realized that framing the debate in terms of LGBT discrimination and the difficulties that this community faces would probably not help with winning the referendum in a conservative country like Ireland. Instead, they related the referendum to love, marriage equality, happiness, etc. These are elements that most people can relate with and are likely to gather more people around your cause. If you talk instead about discrimination and difference it becomes less relatable to heterosexuals, and you give an opening to frames that might be used against you. This is especially true in conservative countries or societies where people are experiencing fears over losing grip of their traditions and way of life.

You are right. Discussing SRHR only with people from within the SRHR community can sometimes feel as if one is living inside an echo chamber. Everyone agrees and nods with everyone else, but we do not know much about what people who do not belong to our bubble are thinking.

AC: Exactly. We believe that the most important thing is to have data about what people think. We tend to naturally reason from our own bubble, and it is very difficult to move away from that and see the broader picture. Even when one acknowledges this, it is still difficult to reframe your message. It greatly helps having hard data so that you can see how to structure your debate in terms of do’s and don’ts. It is important to understand that you don’t necessarily win a debate by having the right arguments. You win it by making the right connections. For instance, there is much psychological research that shows that people are driven by six sources of morality – three of them have to deal with the autonomy of the person, and three have to do with community. Liberals are often very good at using the moral foundations of autonomy. For example, we frame many issues by talking in terms of freedom and oppression. There are many societies, however, that derive their morality from moral foundations of community: loyalty versus betrayal, hierarchy versus subversion and sanctity versus degradation. In order to clearly get one’s message across in such contexts it is important to acknowledge the morality of your audience and see how your issue relates to that. Otherwise, you will be completely disconnected from the social reality and the way people feel. The problem with liberal voices in such social contexts is that they often do not realize that they sometimes have to make use of the broader spectrum of morality in order to achieve their goals.

As you are well aware, promoting SRHR in this time of rising populism is proving increasingly difficult. What will be, in your opinion, the next greatest challenge facing the efforts of the SRHR community?

AC: I am not sure I can predict the future. What I can say, however, is that there seems to be some light at the end of the tunnel for the SRHR community. The rise of Trump and Brexit makes for a good moment for reflection. It is normal to feel nervous and to doubt yourself in these circumstances. However, if the cultural backlash theory is correct, then the reason we are seeing this reaction is precisely because the long term trend is toward progressive values going up.

Thank you for this lovely interview. Your insights have given great input for Share-Net Netherlands to potentially develop a series of workshops for our members where they will be able to engage in hand-on experiences to reframe their message on SRHR.